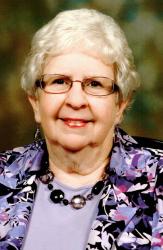 Dorothy was born in Washington, Missouri on March 22, 1937, a daughter of the late Dorsey A. and Helen (Kampschroeder) Wilson.

She was the widow of Orville E. Scheer. They were united in marriage on September 27, 1958, at St. Peter's United Church of Christ, New Haven. Orville preceded her in death on June 14, 2010.

She is preceded in death by her beloved husband of 51 years, Orville, her parents, by a daughter Karen, a granddaughter, Kathryn, a sister Ruth Goodman, and brother James Wilson.

Dorothy was a member of Shepherd of the Hills Lutheran Church, DYOT luncheon group, and Nimble Thimbles Quilt Group.

Dorothy graduated Deaconess Hospital School of Nursing as a diploma RN and was privileged to be a part of the early growth of Home Health Nursing. After her marriage to Orville, they began married life on their farm at New Haven. In 1985, the opportunity arose to purchase South Central Stockyards with partners, Loren Sutton and Brady McCall so they moved to Rolla, Missouri and Dorothy continued in her nursing career. After retiring from nursing, she partnered with Orville in Scheer & Scheer Cattle Company. In 1997 they purchased a home in Mission, Texas and spent enjoyable winters there.

Dorothy loved reading, sewing, crafts and raising flowers, especially roses. She and Orville planted roses at each of their homes. She also enjoyed traveling and family gatherings. After Orville's passing, she returned to Washington, Missouri and then to Hermann to be near family.

Visitation was held Wednesday, May 20 from 4 to 7 p.m. at Toedtmann & Grosse Funeral Home, Hermann.