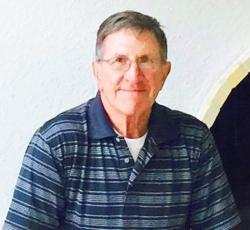 Mr. Jim D. Grimes, of Berger, Missouri, passed peacefully at home surrounded by his wife and children on Wednesday, Jan. 27, 2021. He had reached the age of 81 years, 3 months and 24 days.

Graveside services will be held at 3:00 PM on Saturday, May 22, 2021 at the First United Methodist Church Cemetery, 867 Ming Drive, Washington, Missouri 63090. Interment will follow for Jim and his son, Jacob. Afterwards the family cordially invites any and all to join us to celebrate a life that touched so many hearts. We will gather at 5:00 PM for a pioneer picnic at the Daniel Boone Home Grand Pavilion, 1868 Hwy F, Defiance, Missouri 63341 to honor and celebrate Jim’s life.

Jim was born in Sikeston, Missouri to Homer and Lue (Vanover) Grimes on October 3, 1939. He attended school in Sikeston and then went on to earn a Bachelor’s, Master’s and Specialist’s degrees in Education. Jim started working at age seven to help support his family. His early jobs included working at a golf course as a caddy, picking cotton and mowing grass for the Sikeston City Parks Department. He also drove a concrete truck in the summers when he first began his teaching career. He held many positions over his thirty plus years in the education profession including a teacher, principal and superintendent of curriculum. He was always an advocate for children, teachers and public education. He spent much of his educational career as a principal at Daniel Boone Elementary in New Melle, Missouri in the Francis Howell School District. After retirement from the Missouri Public School System, he sold insurance for Farm Bureau and American Family.

Jim loved working outdoors, gardening, hobby farming and his tractors. He especially enjoyed history, geography and politics. He liked walking and going for drives on back country roads. He truly followed the roads less travelled. He enjoyed genealogy trips with his wife, Nettie. He liked to fix and make things better. He was a builder, not a wrecker. He was a role model for many and his word was his bond. He was a beloved husband, father and grandfather.

Memorials may be given to The Salvation Army USA c/o Martin Funeral Home, 510 East Main St. Warrenton, MO. 63383 or online at www.salvationarmyusa.org.