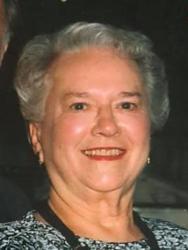 She was born November 13, 1922 in East Alton, Illinois, the daughter of Ralph and Ivalene Jones.

In February of 1941, she married Donald Harrod, because she had been in love with him since she was 14 years old. They were married 61 years when he died in 2002.

Nina was an employee of the Roxana School District for 24 years, retiring as administrative assistant to the superintendent. Prior to her retirement, she was a charter member of the Bethalto First Christian Church, and later moved to Missouri becoming an active member of the Antioch Christian Church. She played piano and organ during worship services for more than 50 years.

Remains were cremated and a small private service will include family members only.