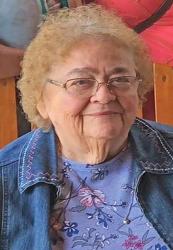 Together, Ruth and John, enjoyed antiquing and restoring furniture in their free time. This developed into a business, first run out of their home, and later located in Hermann. She also worked at one time for Langenberg Hat Factory and also at Maczuk's in the office. Ruth was a member of the New Haven United Methodist Church.

Ruth will be most remembered for her devotion to her family. She enjoyed spending time with her children, grandchildren, great-grandchildren, sister, nieces and nephews and was always there to lend a helping hand making sure everyone was well cared for. She developed a nickname with her grandchildren, as many grandmothers do, becoming known as the “cookie grandma.” She continued throughout her later years to make everyone’s favorite cookies for holidays and birthdays. One of her favorite topics of conversation was to share stories about the great-grandchildren’s visits. She always made sure to have a ready supply of toys and snacks for them. Ruth was treasured by her family and friends and will be missed by all.

She is preceded in death by her husband, John Findlay, a step-son, William Findlay, her parents, two sisters Veatrice Kilgore and Laverne Pointer, and nephews Gary & Jeff Kilgore.