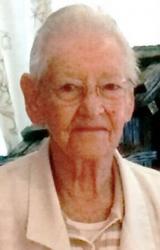 She was the widow of Melvin E. Holtgrewe. They were united in marriage on November 3, 1946, at Bethlehem Lutheran Church, New Haven. Melvin preceded her in death on September 16, 2014.

Selma is survived by two sisters-in-law, Evelyn Von Behren, of New Haven, and Jeanelle Von Behren, of Lee's Summit, Missouri, and by many nieces & nephews. She is preceded in death by her parents, by her husband, by her two brothers, Harvey and Louis Von Behren, and two sisters, Lorene & Mildred Brandt.